The Booylgoo Project comprising one granted tenement is located 60km east northeast of Sandstone and some 610km northeast of Perth. The Project covers the northern part of the Archaean Booylgoo Range greenstone belt and contains 35km of mapped banded iron formation (BIF). The tenement is considered to have potential for iron ore in the form of hematite/goethite deposits associated with these BIF units. 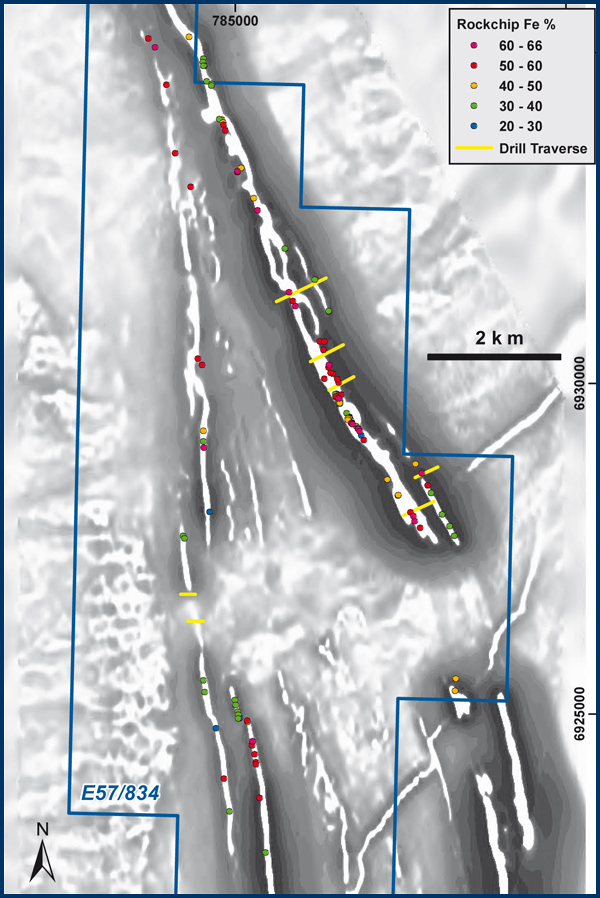 Enterprise completed a detailed aeromagnetic survey over the entire Booylgoo Project area in January 2012 to assist with the evaluation of the BIF. The survey was targeting areas of “demagnetisation” associated with the known BIF units, which may indicate the presence of high grade hematite and/or goethite formed through alteration/supergene processes.

Systematic outcrop sampling (total 140 samples) of magnetic BIF and hematitic/goethitic units on the eastern and western limbs of the syncline has returned assays of between 25-65% Fe. Fifty one of these surface samples have returned 50-65% Fe, with low silica (SiO2), alumina (Al2O3) and phosphorous. The remaining 89 samples varied between 25-50% Fe. The sampling was limited by available outcrop, and other units which appear to be partially magnetic were not outcropping and hence were not sampled. Detailed geological mapping was undertaken on the eastern limb of the syncline, focussing on BIF and the associated occurrences of outcropping hematite/goethite.

An RC drilling program of 30 holes was completed in July 2012. The drilling commonly intersected a ferruginous hard cap or ferricrete to 10-15m, underlain by an alternating sequence of BIF and felsic tuff, before grading into a mafic volcanic containing abundant magnetite. BIF was intersected beneath the iron rich surficial material (+50% Fe) in most holes, however limited iron enrichment was noted at depth, apart from several narrow 3-6m intervals. The BIF units are invariably siliceous and have an average downhole thickness of 20m. All iron rich intervals were analysed for an iron suite of elements by the XRF method and are summarised below.