The Darlot Project covers approximately 150km2 and is located about 40km east-northeast of Leinster and lies approximately midway between the Bronzewing and Darlot gold mines in the Yandal greenstone belt, see Figure 1. The project is considered prospective for high-grade orogenic gold deposits and VMS style copper/zinc base metal deposits. 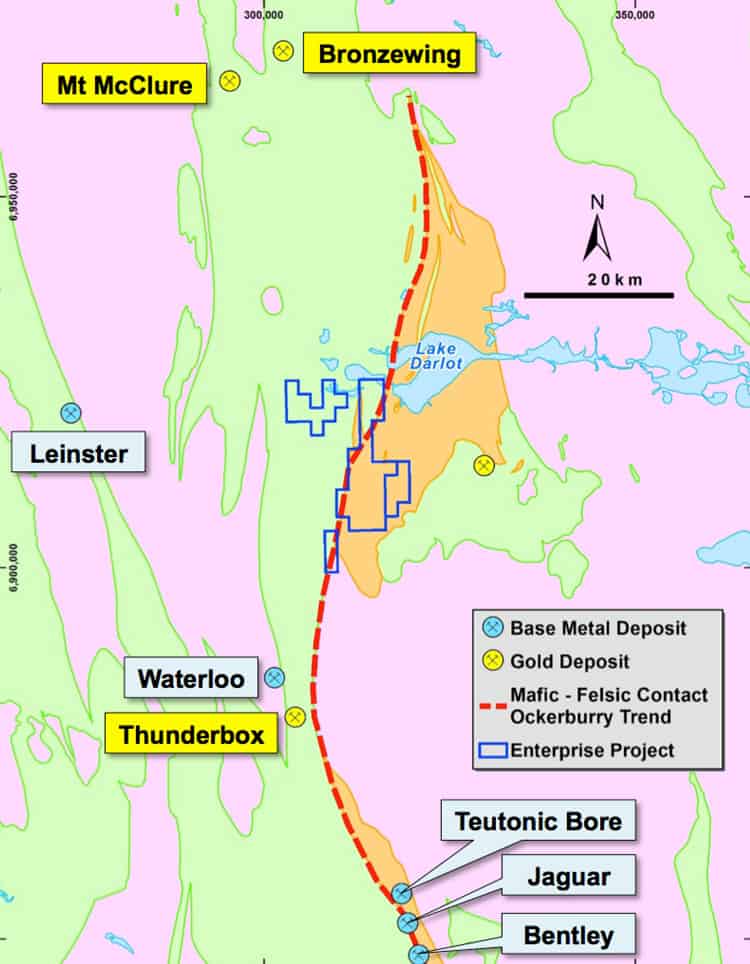 Whilst there has been a large amount of previous exploration within the Project area, there remains a number of untested or poorly tested at depth target areas considered prospective for significant gold mineralisation. Enterprise is using ground IP surveys to assist targeting drillholes beneath and along strike of areas with known shallow/oxide mineralisation.

A regional review of Enterprise’s entire tenement holding in the Yandal Belt has highlighted the potential for volcanogenic massive sulphide (VMS) mineralisation. The focus of this review was the stratigraphic contact between mafic and felsic volcanics, which extends from the northern limit of the Project, 100km south to the significant VMS deposits at Teutonic Bore, Jaguar and Bentley.

A program of re-sampling fresh bottom of hole drill chips from historic drillholes was undertaken, with the samples submitted for “hylogger” spectral analysis. The method of analysis was visible–near infrared – short wavelength infrared (vis-NIR-SWIR) reflectance measurements aimed at identifying hydrous phase minerals, i.e. micas and chlorites, which are useful in VMS exploration. To assist with the interpretation, the drill chips were also analysed for an extended base metal suite of elements.

The company plans to further investigate areas of gold and base metal anomalism with aircore and RC drilling.