Apollo’s interest in the Orpheus Joint Venture was subsequently transferred to Constellation Resources Ltd (ASX: CR1) which raised $7 million via an IPO and listed on the ASX on 30 July 2018. The joint venture tenements are shown in Figure 1. 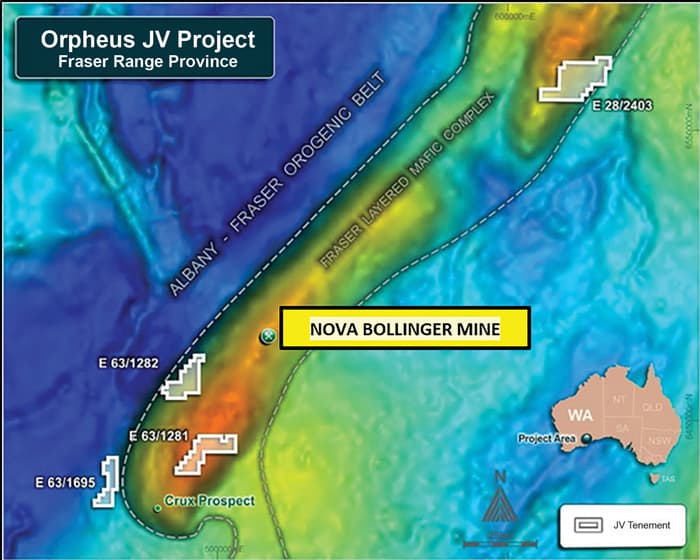 The Fraser Range province is considered prospective for nickel, copper and gold, and has attracted significant exploration since the discovery of Independence Group NL’s (ASX: IGO) Nova-Bollinger nickel and copper deposit in 2012. The bulk of the Project is strategically located along strike and mid-way between the Nova deposit to the northeast and Independence Company’s Crux nickel prospect to the southwest. Recent work has confirmed a number of targets within the Orpheus Project tenements and Constellation Resources is undertaking systematic exploration to assess these targets

During the year ended 30 June 2019, a second phase moving-loop transient electromagnetic (MLTEM) survey was completed on Exploration Licence 63/1281 for nickel. Two prospects, Mag2 and Plato South (Figure 2) were surveyed to test for potential conductive anomalies at a number of targets. 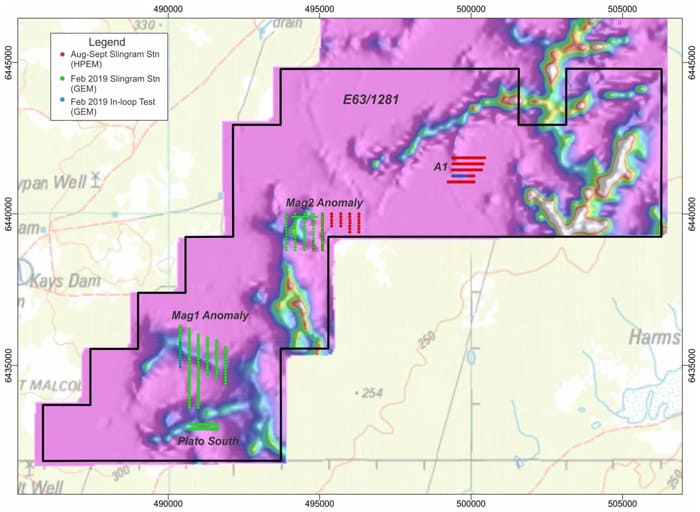 The 2019 EM surveys were completed by GEM Geophysics during February 2019 using their 60-80A transmitter and Jessy Deeps high-temperature SQUID B-field sensor. A total of 450 stations were recorded over 33 lines for a total of 31.05 line-km.

The most interesting anomaly to come out of the program was a weak anomaly in the north western part of the Mag 2 area. The model for this anomaly is a relatively weak conductor, and appears to be related to a SSW–NNE structure.

The Slingram follow-up of the subtle in-loop anomaly at Plato South has confirmed a possible weak conductor in this area, but modelling suggests it is relatively low conductance and could be at significant depth.

A weak anomaly at the northern edge of the survey is of potential interest. Modelling suggests the potential source could be a SSW–NNE striking, steep-dipping low level conductor (Conductance: 210S) at a depth of around 150 metres. The modelled plate size is 300 metre x 300 metre dipping steeply to the southeast.

The modelling of the MLTEM data suggests the response is from depth, rather than being a surficial response from the palaeochannel sediments, but the source of the anomalism is ambiguous. This weak response could be representing a number of sources including remobilised sulphides or graphite, locally more intense alteration along the fault plane, and/or locally more ground water within this complex fault zone.

The local MLTEM anomaly is located on a discontinuity along a SSW–NNE mid time HeliTEM. There also appears to be some truncation of magnetic features in this area that suggest this is a site of an east–west structure. The MLTEM anomaly looks to be located at the junction of two fault trends.

During the 2017 review, several HeliTEM targets on Exploration Licence 63/1282 were identified for ground EM follow-up. All targets are under shallow cover and any subcrop found was weathered and leached. Ground EM surveys completed over these targets during the year ended 30 June 2019 did not return any anomalism.

Four regional moving loop electromagnetic (“MLTEM”) test lines were completed during the year ended 30 June 2019 to cover the strongest parts of the gravity anomalies. Although these test lines did not return any significant anomalism, they did indicate that ground EM was effective in “seeing” to basement and therefore can be used for direct drill targeting for massive nickel sulphides.

During May and June 2019, an RC hole drilling program was completed on Exploration Licence 63/1282 to test a 3km long low-level gold-in-soil anomaly with a peak value of 27ppb Au, coincident with NE-SW trending magnetics. The majority of the RC drilling was focussed over a coherent 350 metre x 150 metre gold in soil geochemical anomaly.

A total of 25 RC drill holes were drilled for 2,370 metres to test this gold in soil gold anomalies. Drilling was completed on lines spaced 100-200 metres along strike with drill holes spaced at 30 metre intervals across strike (on some lines up to 60 metres apart). Drill holes ranged in depth from 60 to 108 metres to ensure fresh rock was encountered.

The RC drilling has shown that the area of the gold-in-soil geochemical anomaly is comprised up to 20 metres of transported clays and gravels and deep weathering to an average depth of 50 metres. The bedrock lithological package is dominated by an intercalated quartz-bioitite/mica garnet gneiss and chlorite-magnetite amphibolite. In addition, occasional chert and BIF lithologies were logged. The amphibolite unit is extremely chloritic and has weak to strong magnetite content. The gneiss can be massive to banded with quartz rich augens and in places displays silica alteration. The target is believed to have been adequately tested and no further work is currently planned here.